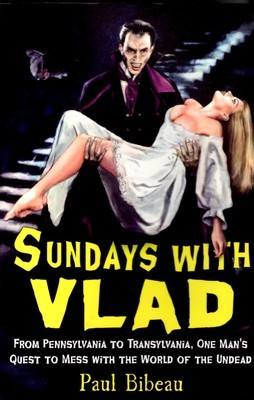 Sundays With Vlad by Paul Bibeau

"Leering at me from across the canyon of merchandise at the Wal-Mart Supercenter is a giant inflatable lawn statue of Mickey Mouse dressed in a tuxedo and velvet cape with a widow's peak and tiny, somehow cute fangs poking out of his mouth ... Above all in the West, the Dracula industry is about change. We take the gripping image and tweak it until it becomes the best product it can possibly be. No one wants a lawn statue of a bloodthirsty medieval prince or a dated Hungarian actor ... They want Mickey." - Author Paul Bibeau in Sundays With Vlad.

In Sundays With Vlad (and Monday through Saturday too, for that matter), author Bibeau sets out to discover everything vampyrish (is that a word?) from the mainstream (Halloween vampire costumes) to the eccentric (Jonathan "the Impaler" Sharkey who ran for Minnesota governor in 2006) to the way-out-there (those who literally drink blood).

Paul is at his narrative best and most hilarious when he's traveling outside the United States, i.e. in the first and second-to-last chapters. In the former, he recounts that 3-day part of his 1999 honeymoon spent seeking the historical Vlad the Impaler in the Romanian province of Wallachia, at the end of which time he and his new bride, Anne, were prepared to buy an airplane ticket to anywhere just to get out of the "godforsaken crapheap". (Perhaps it was the infestations of beggars and feral dogs that took the romance out of the occasion.) In the latter, seven years later and the wife having opted to stay at home, Bibeau travels back to Romania and its province of Transylvania to retrace the fictional Jonathan Harker's route (in Bram Stoker's Dracula) to Count Dracula's fictional castle. In this case, homesickness, bad roads, and anarchic local drivers seem to be the chief perils.

In between, in chapters that range from mildly to not at all amusing, Paul examines the Dracula/vampire fascination in the West, from films to clubs to swinger groups to killers to music to amusement park funhouses to consumer products to museums to live-action-role game playing. At one point, Bibeau mentions seeing an example of the anti-vampire kits that were ostensibly available at hotel front desks to Victorian-era travelers traipsing through Eastern Europe, but, in a major omission, he doesn't describe the kit's contents. Garlic, crucifix, holy water, mirror, and sharpened stake, perhaps? Also, he makes almost no reference to my personal favorite American icon and resident of my most fevered dreams, Elvira Mistress of the Dark.