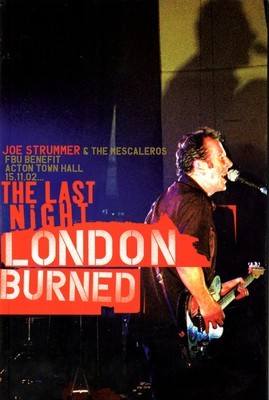 “The Last Night London Burned” began as a posthumous tribute book to Joe Strummer by George Binette, consisting of written testaments and photographs of Strummer’s last London gig at Acton Town Hall. Taking place five weeks before his death in December 2002, the Acton gig took on epic proportions far beyond the humble 700 capacity hall, as that night Mick Jones had taken to the stage with Joe for the first time in nearly 20 years, this book documents that evening

The heart and soul of The Clash, the pioneering punk group that became the greatest rock-and-roll band of the late 1970s and early 1980s, Strummer died from a heart attack in 2022 at age 50

It is a fitting visual tribute to a man who never wavered in his commitment to economic and social justice, or in his willingness to use his music to advance the fight against racism, exploitation and needless war