Only Anarchists Are Pretty Book 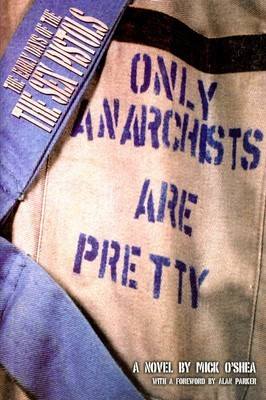 Only Anarchists Are Pretty, The Early Days Of The Sex Pistols by Mick O’Shea

The Sex Pistols remain the key iconoclasts of the punk movement, and from the moment they were seen swearing on national TV, they became tabloid pariahs, and Rotten and Vicious became notorious household names. This semi-fictionalized fly-on-the-wall account focuses on the band’s early days when they were a bunch of rock-obsessed street urchins and petty crooks, rehearsing, bickering, fighting and hanging around Malcolm McLaren’s shop SEX. Captures the true chaotic spirit of punk

The Sex Pistols rose to stardom and tabloid infamy following iconoclastic singles Anarchy In The UK and God Save The Queen and a foulmouthed outburst on Bill Grundy's Today TV show. Before all that, back in the years 1974-1976, the band members were a bunch of rock 'n' roll obsessed urchins, hanging around Malcolm McLaren's shop Sex [Only Anarchists takes its name from one of McLaren's shirt slogans] arguing, fighting, and forming a band to relieve the boredom. Mick O'Shea gives a fly-on-the-wall semi-fictionalised account of the Pistols' early rehearsals, writing sessions and chaotic support slot gigs at art-schools and pubs - capturing the chaos, rancour and the strange innocence of it all.- Dates, times and places are correct, the rest is the stuff of myth, a rollercoaster ride through the Pistols before Grundy. From December 1st 1976 via the 'Today' show the group became very public property, before then their story is shrouded in hearsay and half truths, foggy at best, unless of course you choose to read this book!- Alan Parker, Sid Vicious biographer