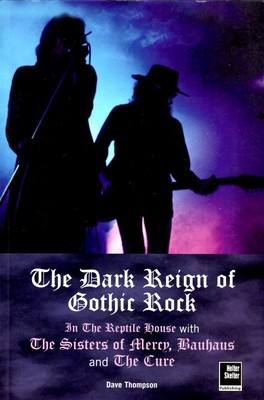 The Dark Reign Of Gothic Rock by Dave Thompson

Starkly lit and draped in fog, blatantly minimalist in an age when ‘bigger’ was generally regarded as ‘better,’ there was little to actually look at, but a great deal to watch, three figures choked in cloaking smoke, the now omnipresent hats and ponchos conjuring images that would not be out of place in a Peckinpah movie. And that was before the band kicked into either ‘Phantom,’ with the ghosts of The Good, The Bad And The Ugly floating around its skeletal melody, or Dylan’s ‘Knocking On Heaven’s Door,’ lifted straight from Peckinpah’s own Pat Garrett & Billy The Kid. Other bands have toyed with the taut, tense expectation that was lay at the soul of the Sisters experience. But none before had ever captured it with such chilling calculation

From Joy Division to Nine Inch Nails and from Siouxsie to Marilyn Manson, gothic rock has endured as the cult of choice for alienated youth. But, during its heyday in the mid-eighties, when The Sisters of Mercy, Bauhaus and The Cure dominated the independent scene, it was the underground alternative to the glossy throwaway pop of the day

Dave Thompson traces the roots of this golden era back to Iggy Pop’s The Idiot. Taking in Hammer House of Horror, Dennis Wheatley, and a myriad of other influences, Thompson charts the evolution of a sound through the Doctors of Madness, the despair of Joy Division and the pantomime horror of The Damned and beyond

Recommend this to a friend  +